“I Will Always Go Back to Haiti, a Piece of My Heart is There” 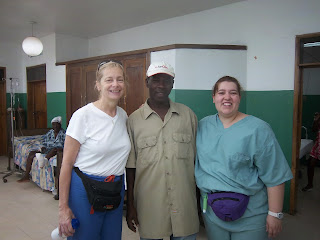 “This was my fourth trip to Haiti, and it is always such a culture shock when I come home. When you first get there, it all seems so different, but by about the third day it just becomes your reality. Before you know it, it’s almost time to go home and that is so bittersweet. I am usually so ready to go home and see my family, but so sad about leaving Haiti. It’s kind of like there are two of me..the me who is wife, mom, grandma, daughter, sister and the me who goes to Haiti.

I was part of a really great group of people, most of whom I had not met before. We had 2 surgeons, a pediatrician, 2 family practice doctors, 4 nurses and two non medical folks. We went to Hopital Sacre Coeur in Milot, which is run by the Crudem organization. It is the main hospital for that area, and the main focus of Crudem is to help transition the hospital to eventually be all Haitian run, but improve standards of care and services that can be offered. It was a difficult week in many ways. We are supposed to work with the Haitian staff, being careful not to step on any toes or try to take over, but to help improve their knowledge and abilities. Very difficult, almost impossible sometimes. Many were not receptive, some were resentful, and there is such a cultural and language barrier. I ended up doing mostly wound care, which is something the nurses were happy to let us do for them. There seem to be many severe burns, so there were many complex and painful dressings to be done. That was quite a challenge, too, because the routine is to do dressing changes every 2 days, nothing like what we do at home. We had to just do what we were asked. The patients were all really glad to have us care for them, many were very particular about technique. Several patients were used to wounds packed with honey soaked gauze, not normal saline as we would use at home. They were also very particular about how much gauze was used, and how leg/foot wounds were wrapped. That part was actually very rewarding. I had one patient whose leg wound was very extensive and painful, requiring much soaking just to remove the old bandages. He would gesture and talk very rapidly, frowning the whole time, so I was sure he was very unhappy with me. When I was finally able to get a translator to work with me, it turned out he was so happy with my work, said his wound felt so much better after I was finished and he was finally able to sleep. I would never have guessed that from the way he was acting.There is your cultural difference again. 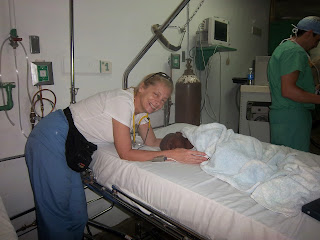 There was one instance in which a tiny baby died, as we were holding her actually, She had been very ill and was not expected to survive. Several of us took turns holding her so she wouldn’t die alone, because we weren’t sure where her mama was. When she died, we could hear her mama outside shrieking and screaming, but she never came inside. We just didn’t understand, but in the Haitian culture that’s not what they do. Apparently they don’t want to see the  person who has died, but go through very loud public mourning. Another cultural difference to learn. I had seen that on other trips, but never really figured it out until then.

There was a very sick girl I cared for as an ICU patient one of the days. She had previously had an appendectomy, but had apparently developed an abscess and was getting sicker every day. Our surgeons operated on her along with her Haitian surgeon, and we cared for her afterwards. We were all really pessimistic about her chances for recovery, but she was better before we left, and our team was recently able to find out that she has been recovering well.

One afternoon a group of us went to visit what we were told was an orphanage, but was actually a children’s home run by a church based group from the US. Their goal is to promote prenatal nutrition and try to keep babies with their families. They also facilitate adoptions of children who are truly orphans. It was an amazing place, and very inspiring. Definitely a high point of the trip. It is called Children of the Promise. 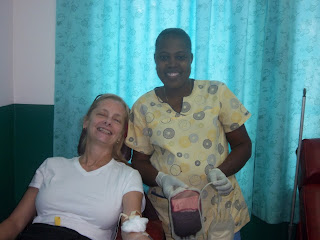 Our last day we thought we were all done, but late in the afternoon there was a car accident with multiple injuries and we all went back to work to triage patients. That was actually one of the more fulfilling parts of the week for me, because it was just hands on care, doing what needed to be done.

Overall, it was a good week. It is always a mixed bag for me. I will always go back to Haiti, a piece of my heart  is there. I am very grateful to One Nurse at a Time for the financial contribution, and also for the positive  reinforcement you gave me. I had so many supportive and encouraging emails from you all, and it really meant a lot to me.”

Jeanie Fry has been a registered nurse for 28 years, working at Barnes Jewish Hospital in St Louis, Missouri. She is a 1984 diploma graduate of The Jewish Hospital of St Louis School of Nursing. She is married with 3 children and 4 grandchildren. Jeanie has always had an interest in mission work, but never had the opportunity to pursue it. When the 2010 earthquake struck in Haiti, she immediately began trying to find a way to go there to help. Jeanie worked with Project Medishare for Haiti at a tent field hospital at the airport in Port Au Prince March 2010 and then again in June 2010. She returned in February 2011 for a week at Bernard Mevs Hospital in Port Au Prince, which is run by Project Medishare. In Jeanie’s own words, “I feel committed to Haiti for the long haul now”.