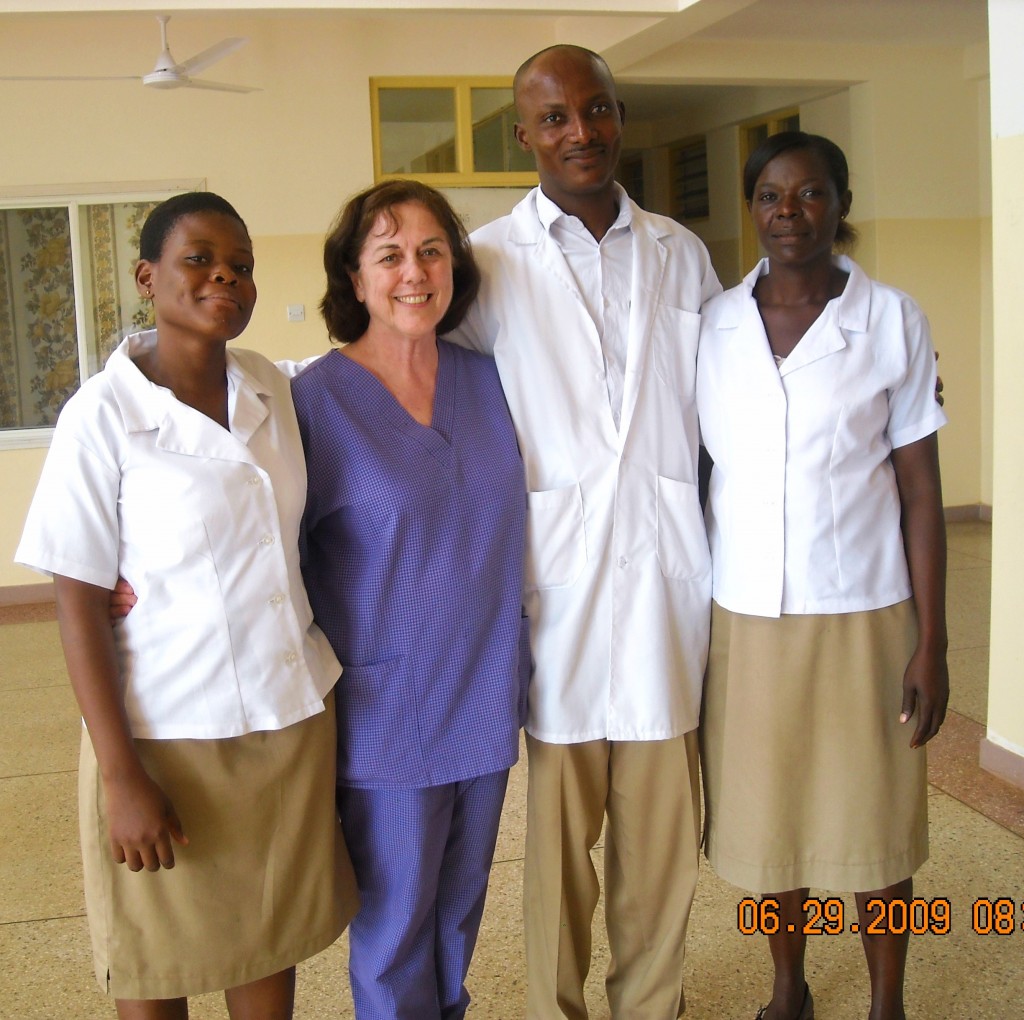 Linda, our second scholarship recipient, is also another second career nurse.  Her work prior to nursing was as a psychologist in the Mid West.

We were walking down the hall at the end of a seemingly extra long day when my co-worker said, “When are you going to Ghana”? “In a couple months”, I answered. “Boy! You wouldn’t catch me doing something like that! If I gathered enough money to do that, I’d spend it on my family, do something fun with them! I wouldn’t trek half way across the world to do something with people I don’t even know!”

“Hmmm”, I responded, thinking to myself how much she sounds like me in the not-so-distant past. It was one of those crystallizing moments when you walk right into a mirror.

I did go to Ghana. I did what I was asked to do, planned to do, and more. It was what I was told it would be, what I thought it might be, and more.  I would do it again in a heartbeat and hopefully will. I traveled with a mission team for the International Health and Development Network (IHDN), a non-profit group born in the mid-1990’s with a mission to “develop effective and sustainable primary health care programs in small towns and villages in the developing world”.  Two groups a year travel to Agbozume, Ghana to work on and in a Mission Hospital built over a 12 year period by IHDN. A winter team of medical students and Interns, a summer team of self-selected individuals mostly teachers and medical practitioners embark on a venture to serve the poor and underserved half way across the planet.

The hospital opened in June 2008. It is building a staff, providing outpatient services, providing community outreach in surrounding villages and the “bush”.  It is strategically located as it is 20+ miles from any other healthcare facility and travel is extremely difficult. While 20 miles might seem nothing to us, it is impossible for most in the Volta region. Cars are a rare possession. Most travel is in very beat-up vans or a bus that carry twice as many people as would be legal in the U.S. The roads, when they exist, are ubiquitously covered with 1-3 foot diameter potholes as deep as they are wide. Travel is not only difficult, it is perilous. They are working on an international road that will front the hospital’s grounds. It will exist – someday. The presence of this “new” hospital in this region is therefore literally saving lives just because it’s there!

Most people think of AIDS when thinking of African healthcare, but in this area of Ghana, AIDS is present but not prevalent. What is substantial is malaria, primarily in children. Gaining ground among the adults is hypertension, diabetes, and back injury/pain. Backs take a beating since the primary mode of carrying goods is on the head. In Ghana a man can expect to live to age 59 and a woman to age 61. Many do not make it.

I had various assignments.  I was responsible for teaching basic nursing skills, hygienic practices, and basic medical-surgical knowledge to their RN and “orderly staff”. I was responsible for training and leading a team of female fellow-travelers in conducting breast cancer screenings at a community health-fair and teaching (women who did not speak English) how to do breast self-exams. In my spare time I helped in the clinic, assisted an Iowa University graduate student who was doing research on Hypertension with BP screenings, and performed breast cancer screenings on all female patients who came into the clinic while I was there. Each morning I woke with an eagerness to go to work that I had not experienced in quite some time. Each evening came far too fast. The work is never finished, the need is endless and supplies and equipment are scarce. Breaking temptation to reuse supplies is one of the greatest challenges for the staff and, sooner than later, the visitors. I am much more frugal at work since I’ve returned.

The experience was rich and profound. Just meeting these new brothers and sisters was reason enough to go. Feeling value was left behind was icing on the cake. As poor as this community is by our standards, it is rich in relationships. You are greeted each day as if you were a life-long best friend and parting has no sorrow in it for they think in terms of “until”. The group of 14 staff members I met was selected by IHDN not just work in the hospital but to become models for others in their community. They are encouraged to be models of hope for a better life, models of service to one’s fellow man, and model’s of professionalism. All but the resident M.D., who is from the Ashanti Region, are locally born and raised. IHDN does not just employ them but teaches them language skills, computer skills, and so on to raise them up into the world-at-large. Because of these goals I felt compelled to give one more thing to them after I returned. I developed a booklet featuring them and their stories. I’ve recently sent them their personal copies to share with the family, friends, and neighbors.  It is this tie to their hearts, their dreams, and their courage that lingers with me months after I’ve returned. I expect it is a permanent part of my awareness.

I am fortunate. I have a wonderful family, work that is meaningful, opportunity for fun and adventure, and really good people for friends. But I know now that none of those things can give one the sense of connection to humanity and something much larger than oneself than can serving the” least of these”.  I only hope this is but the first of many sacrifices of some of my life-time.  As for my friend in the hallway – I hope that on our next trip down the corridor I will be able to clearly communicate how my trip to Ghana was one of the best things I can do for my family. Fun family times and trips are invigorating and will surely continue now and then. However, what my family inherits with this demonstration of service to my fellow man is without question one of the richest and most enduring legacy’s I could leave them.